By: Jon Wilhelmsen
In: Chile, Cityscapes, International Travel, Locations, On the Street, People, Water
With: 0 Comments

Leaving the summer heat of Santiago, we travelled back to Viña del Mar, about 73 miles west of Santiago, where we stayed in an apartment on the 15th floor of an apartment building on Viana and Quillota, a block and a half from the Plaza Vergara. I’m not generally fond of tall buildings, especially in a city known for violent earthquakes. We were calmed somewhat by the fact that Chilean’s have learned to construct some of the best earthquake ‘proof’ buildings in the world. But, to our unease, we could feel vibrations from time to time from the construction of a large building next door. But we passed the week there safely and comfortably while we explored the cities and coast villages nearby.

Viña is a very popular tourist destination and you can see that wandering along Calles Valparaíso and San Martin in the summer (the months of December through February). On weekends especially the street entertainers come out in force. This fellow would stop traffic (not much of an issue, as the traffic along Calle Valparaíso in summer is mostly stopped anyway) and do his mime stuff. As entertaining as he was, I was almost as entertained by watching the kids watch him. 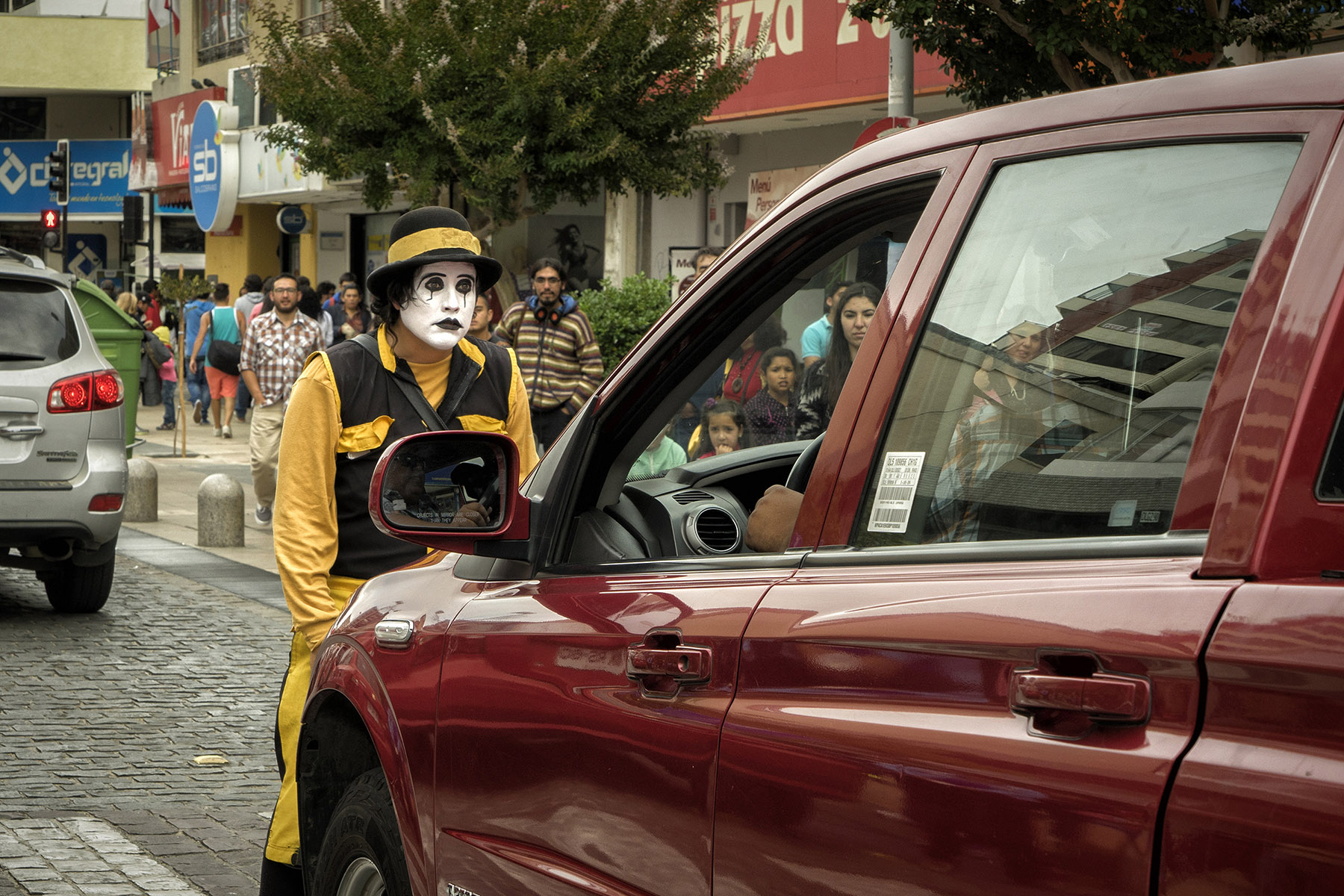 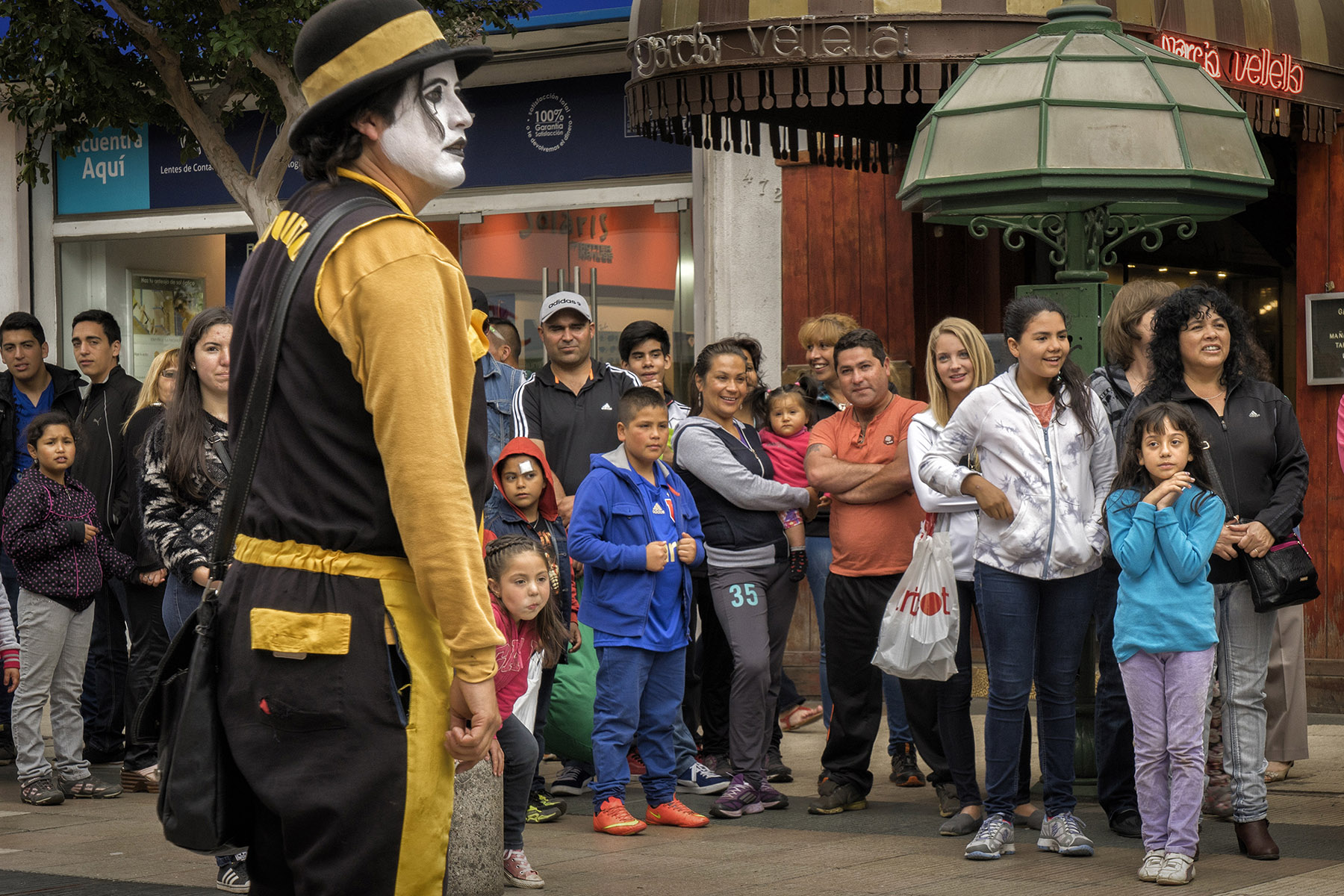 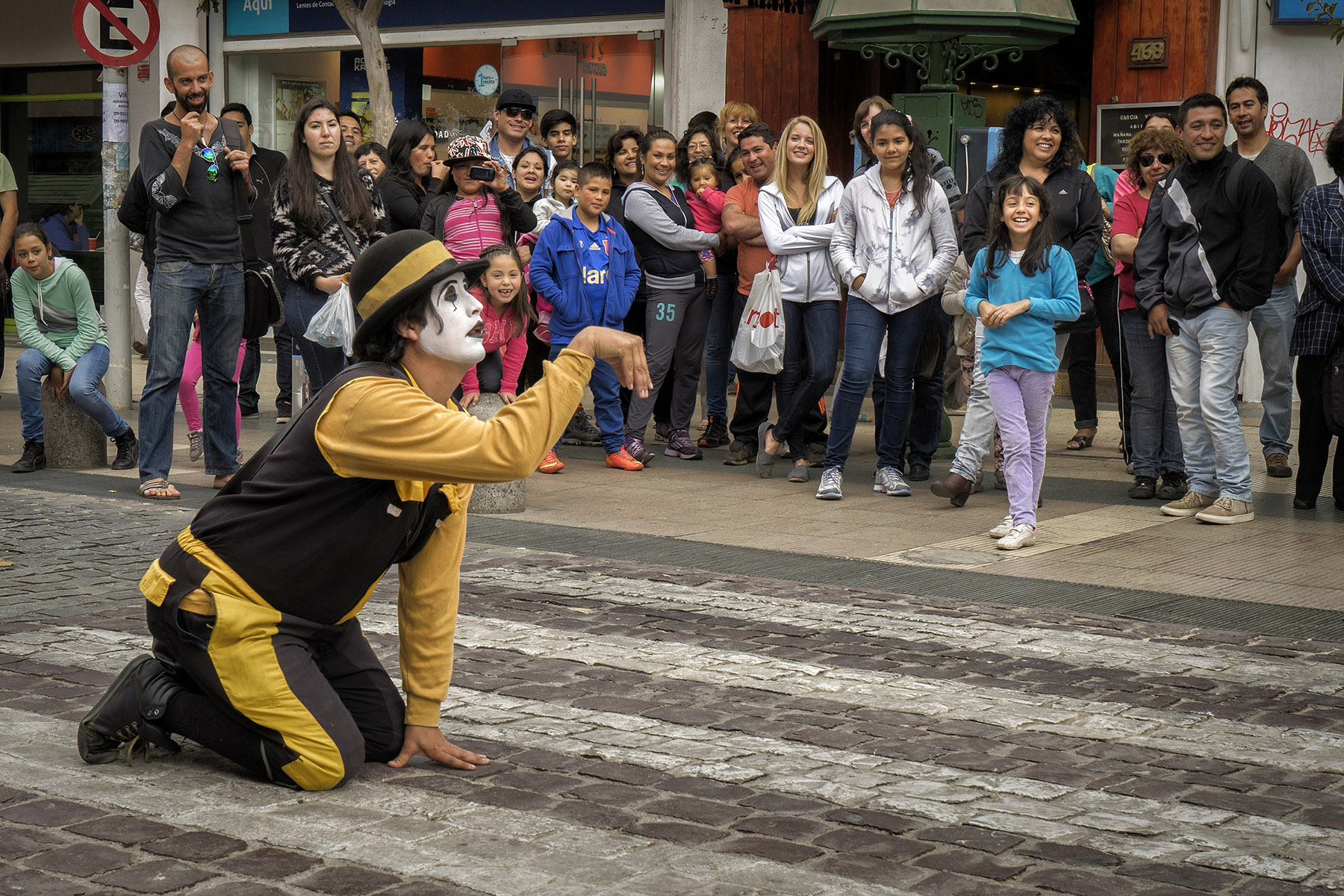 Both in Viña and Santiago, on many busy street corners you’ll see young entrepreneurs jump out in front of the traffic waiting for the light to change and do their thing. Jugglers are more common, but these two had developed a pretty entertaining clown show. 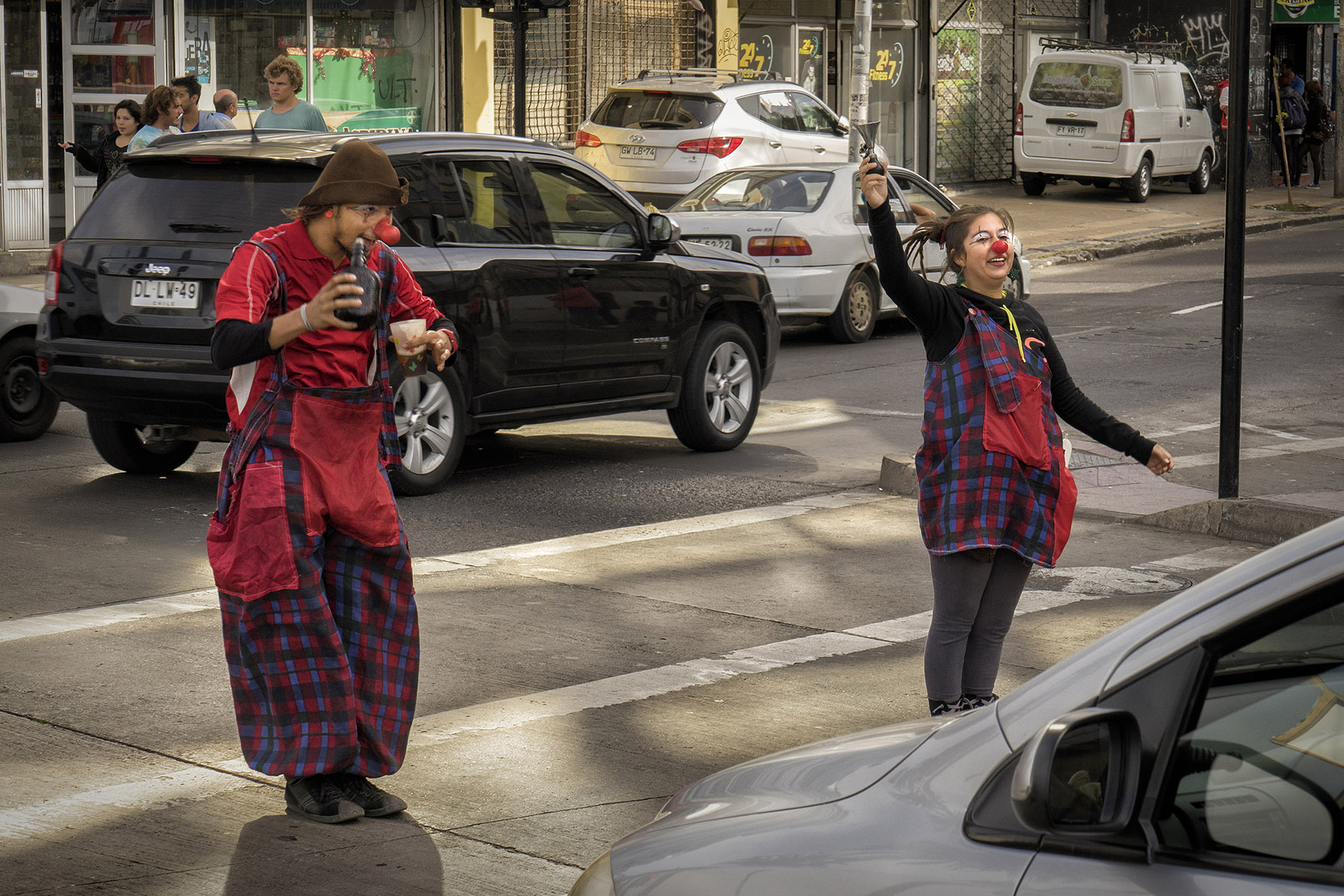 Grima posing on the 2nd level of the Galleria ‘Calle de Cristal’ on Valparaíso Street between Villanelo and Etchevers streets. 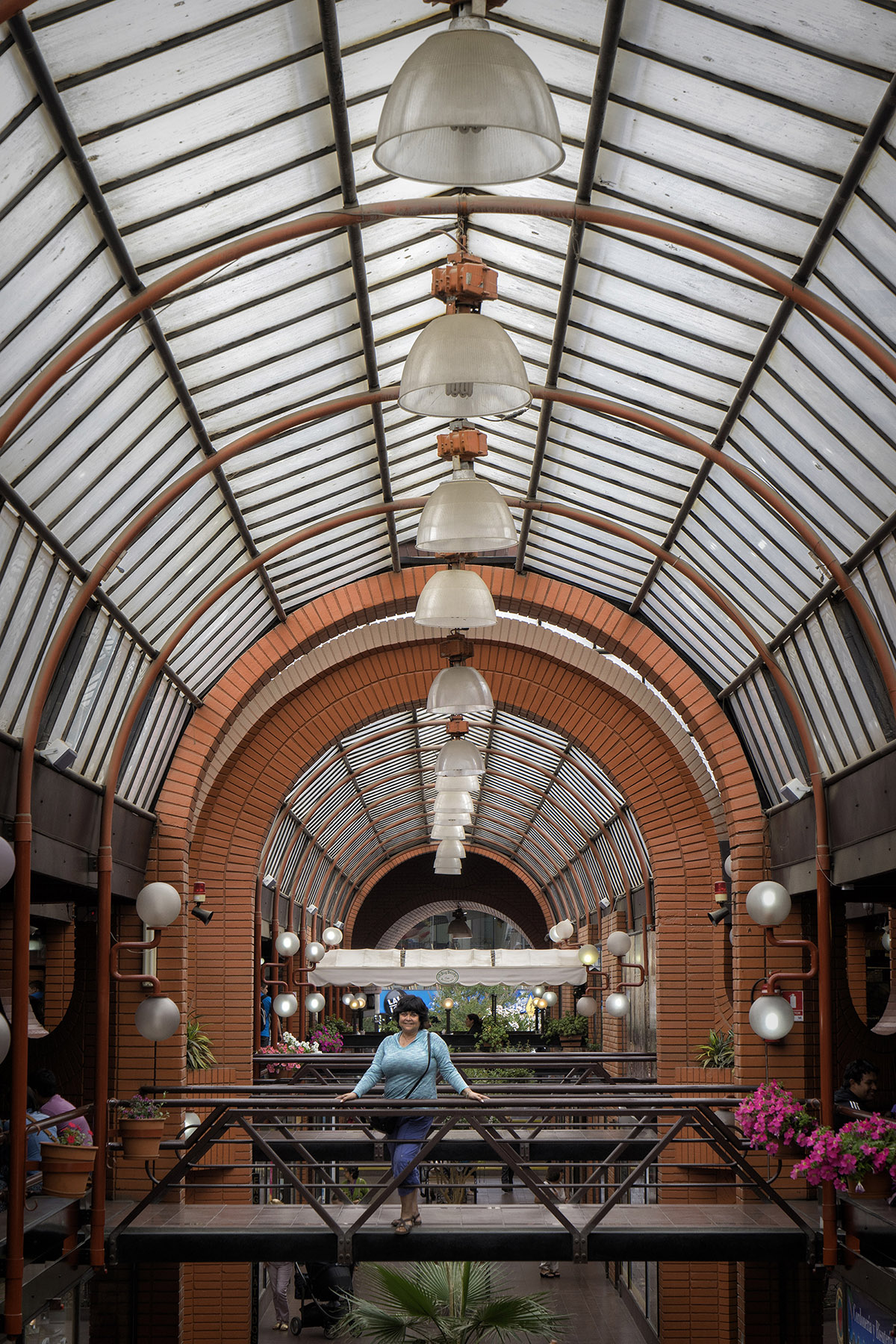 The curved glass roof makes for an interesting photo perspective in the Galleria, along with the minim sculpture below. 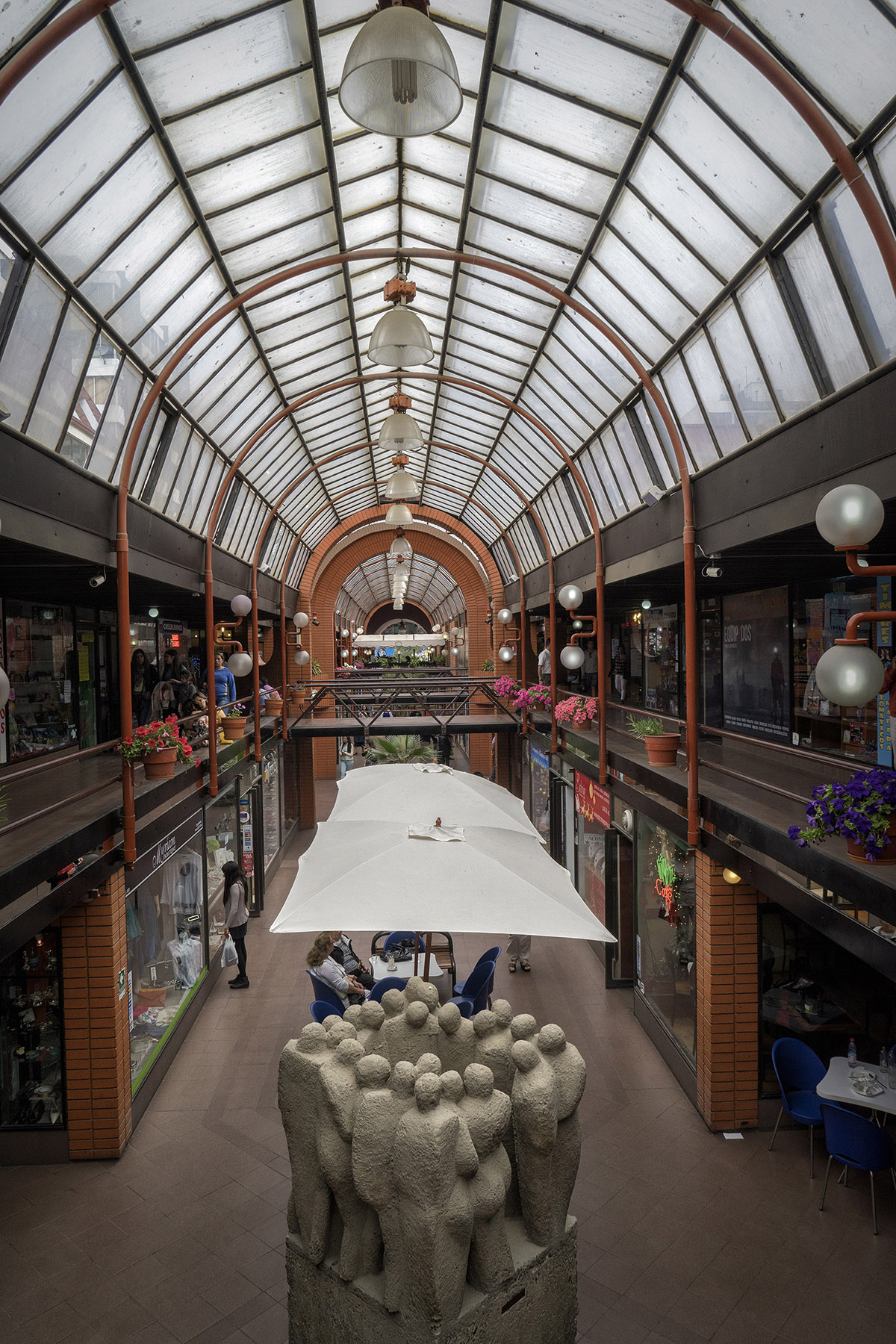 At the intersection of 1 Norte and 6 Poniente is the Plaza Mexico. High rise apartment buildings are sprouting up faster than one can blink. 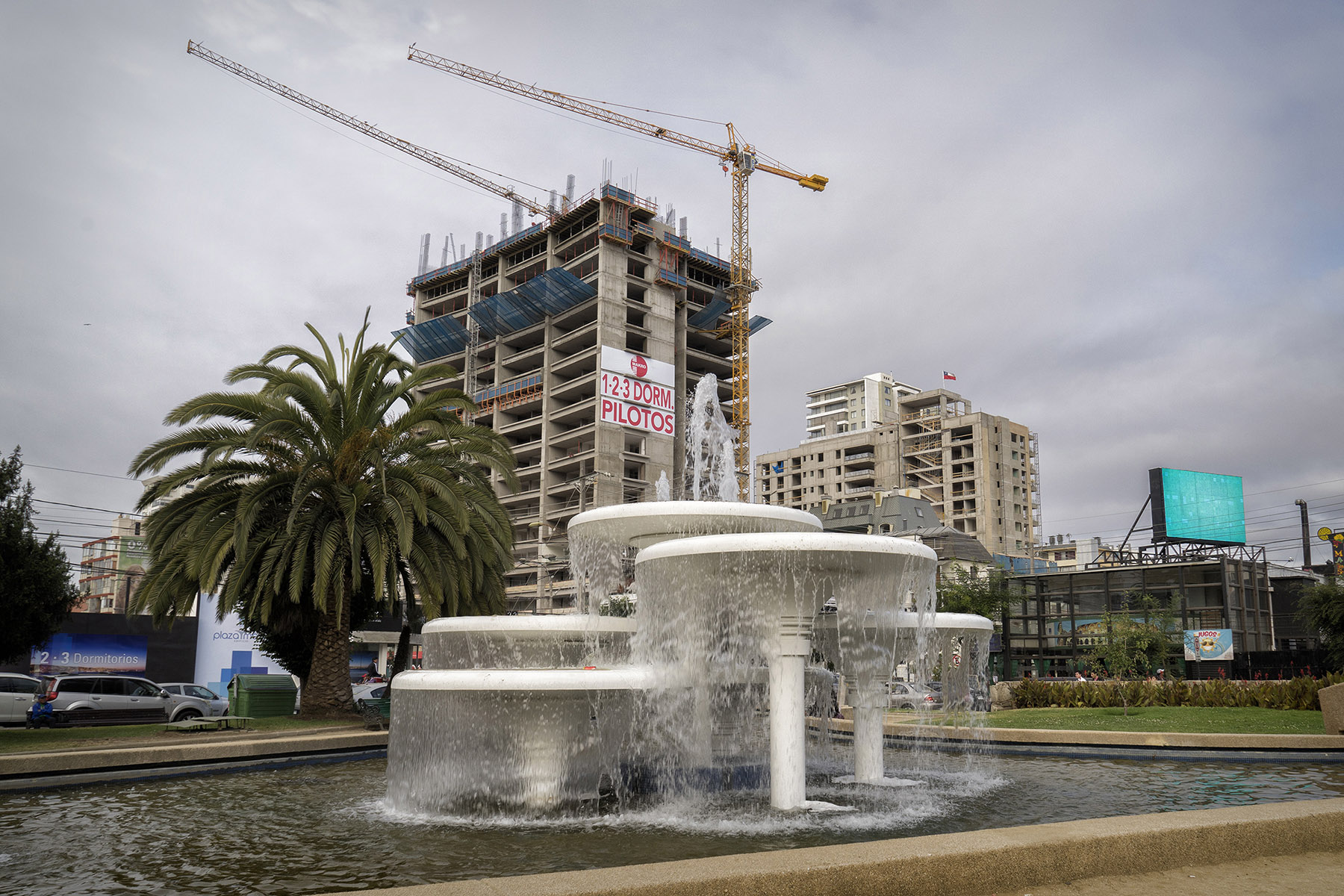 There’s an estuary that divides Viña North to South, ‘Estero Viña del Mar’. Lining the estuary on the Southern side are several interesting apartment buildings. One defining characteristic of apartment buildings on the coast are the large verandas, giving an ‘outdoor’ feel to many of the upper apartments. 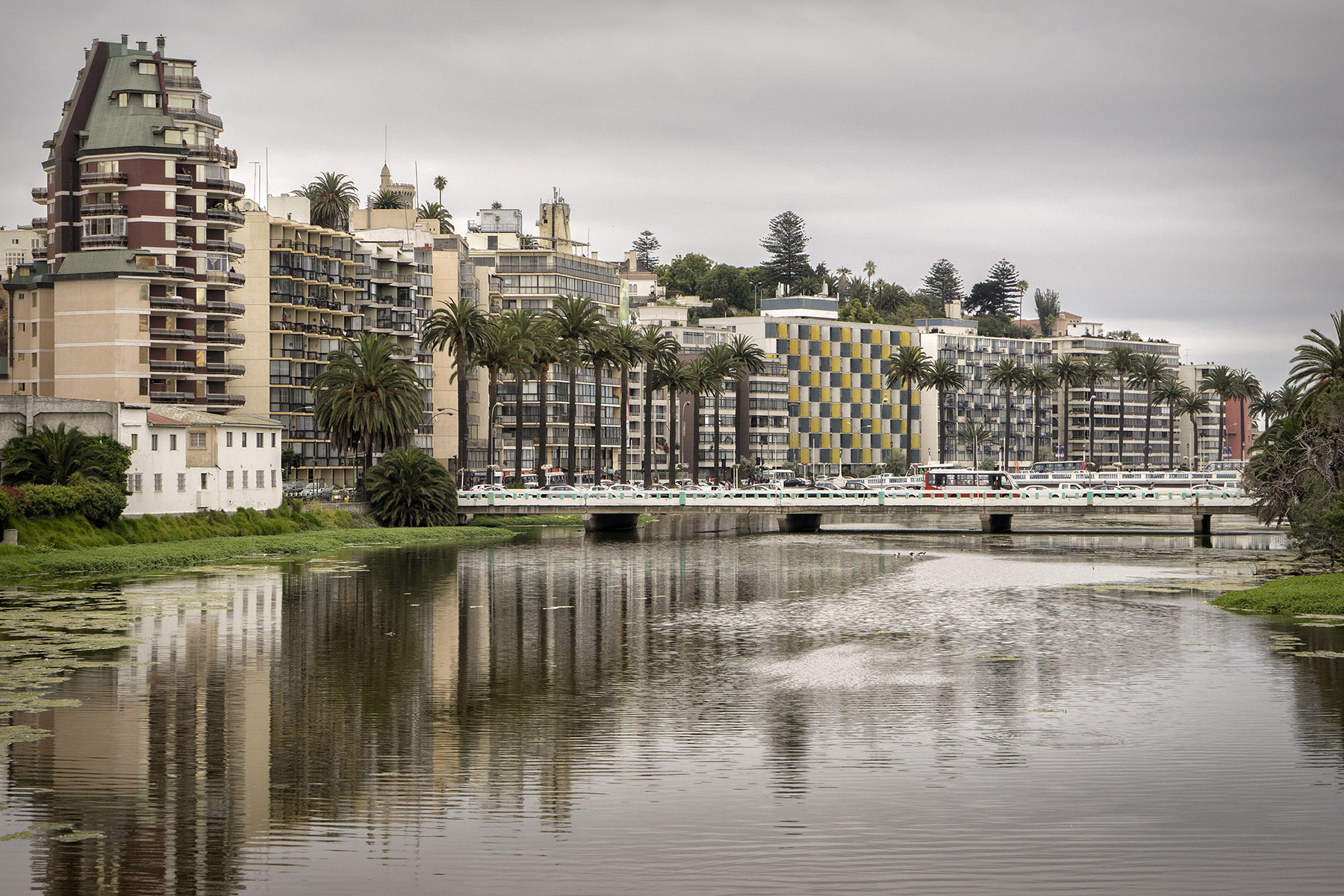 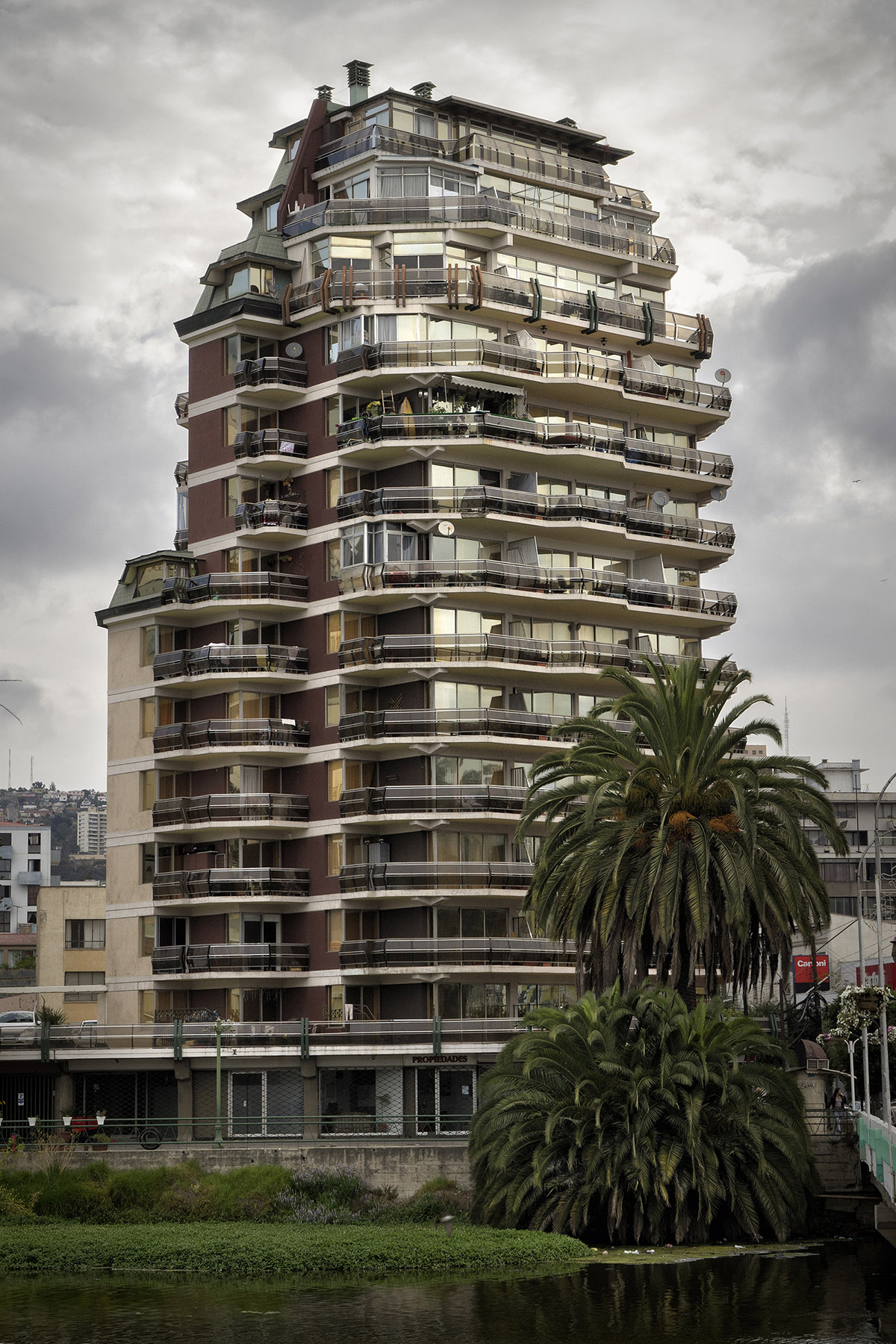 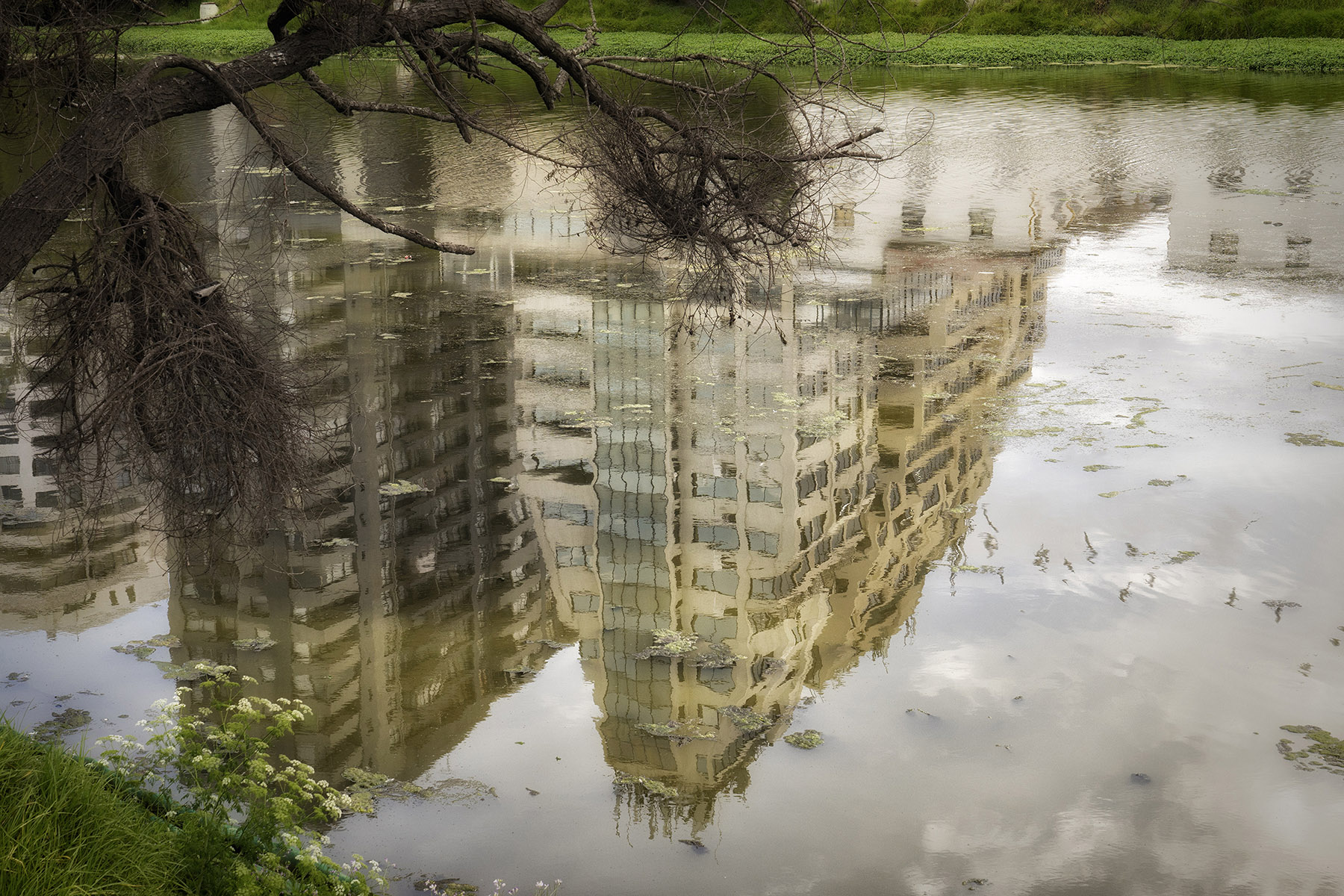 Yours truly on the corner of Puente Villanelo and 1 Norte. 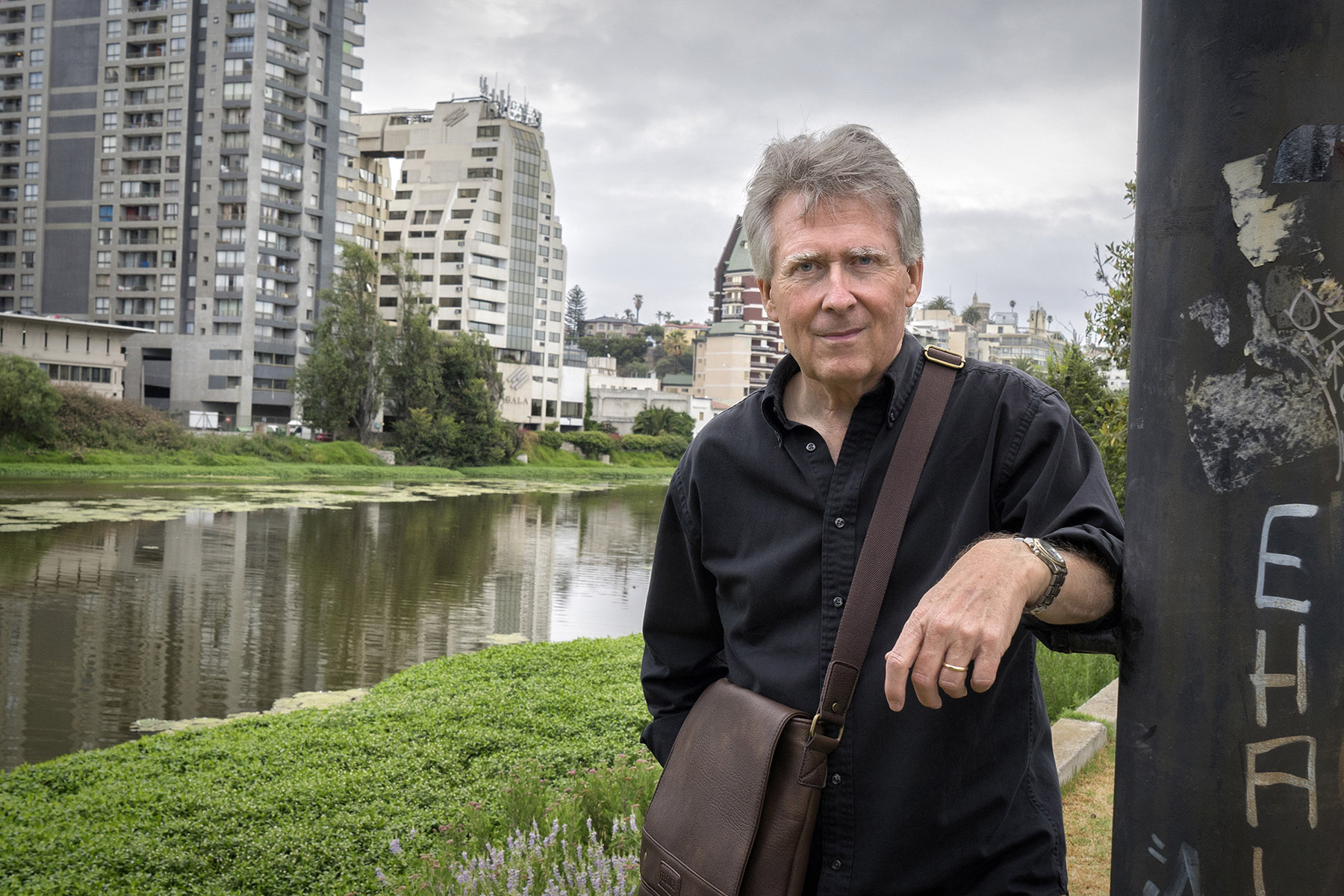 The Chilean national dance is the Cueca, which reenacts the courting of a rooster and a hen. Here in the Plaza Vergara, a man, dressed in Huaso (Chilean cowboy) hat and manta (short poncho) pursues a tourist partner. Normally the female partner is dressed in full huasa or ‘china’ dress, but, alas, she was taking a break at the time we arrived. 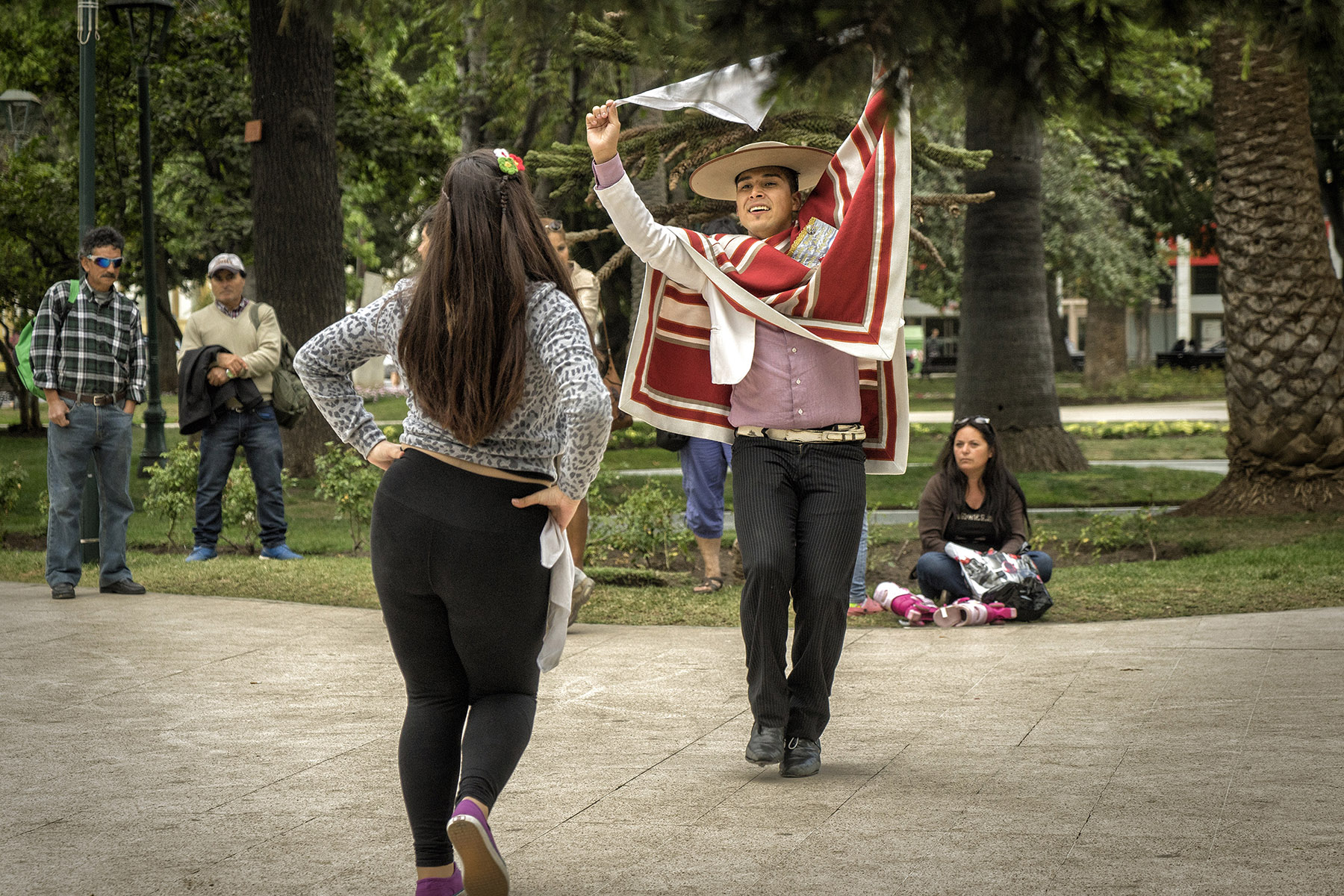 Cards in the park – a universal feature world-wide. I’m chagrinned to admit that I don’t know what game they were playing, but the cards were definitely not the normal poker deck I’m used to. 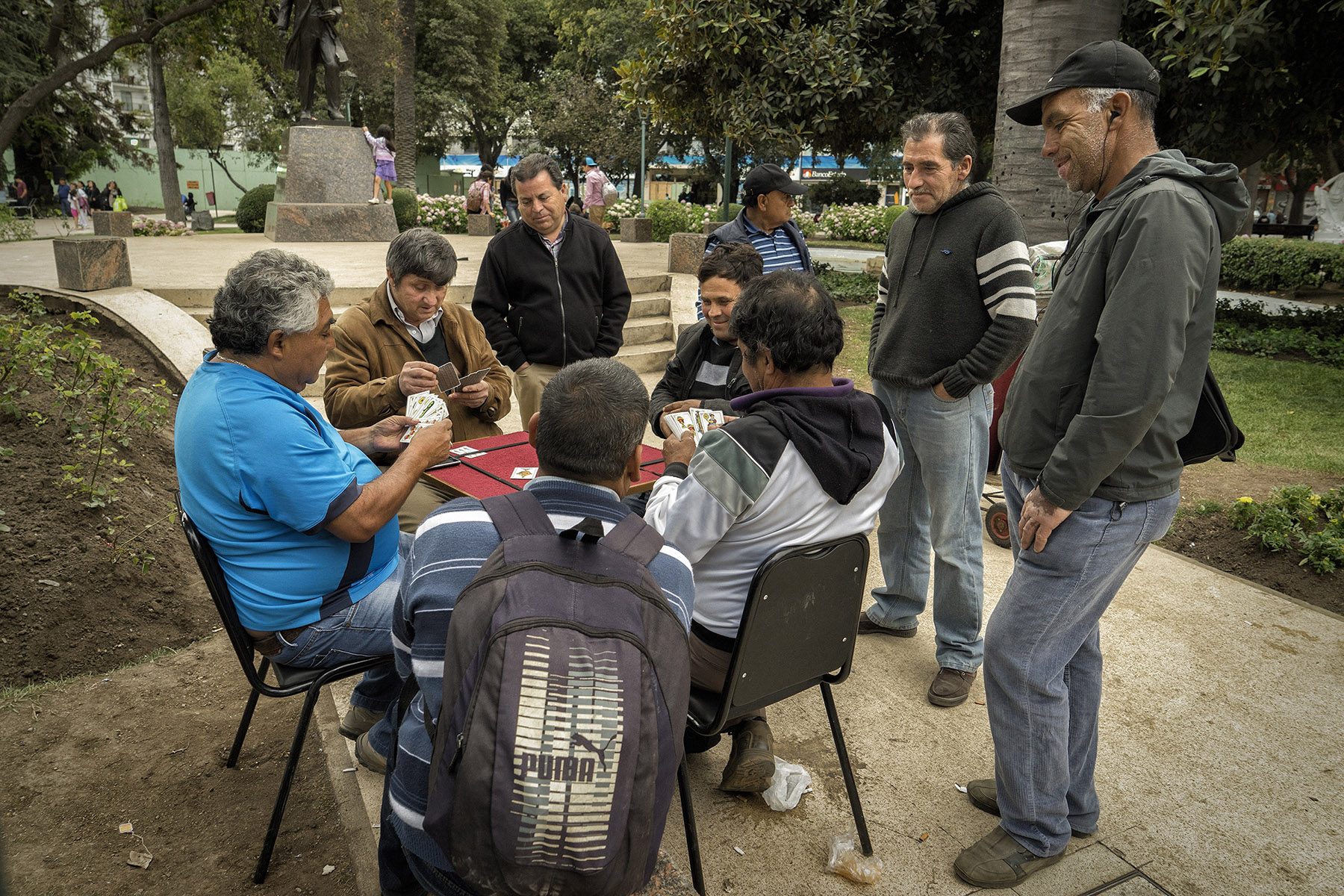